Diego has flown to Bosnia-Herzegovina. The young Egyptian vulture was born at CERM in 2018 and he was released in Basilicata in 2019 by the CERM Association and ISPRA as part of the LIFE Egyptian vulture project. 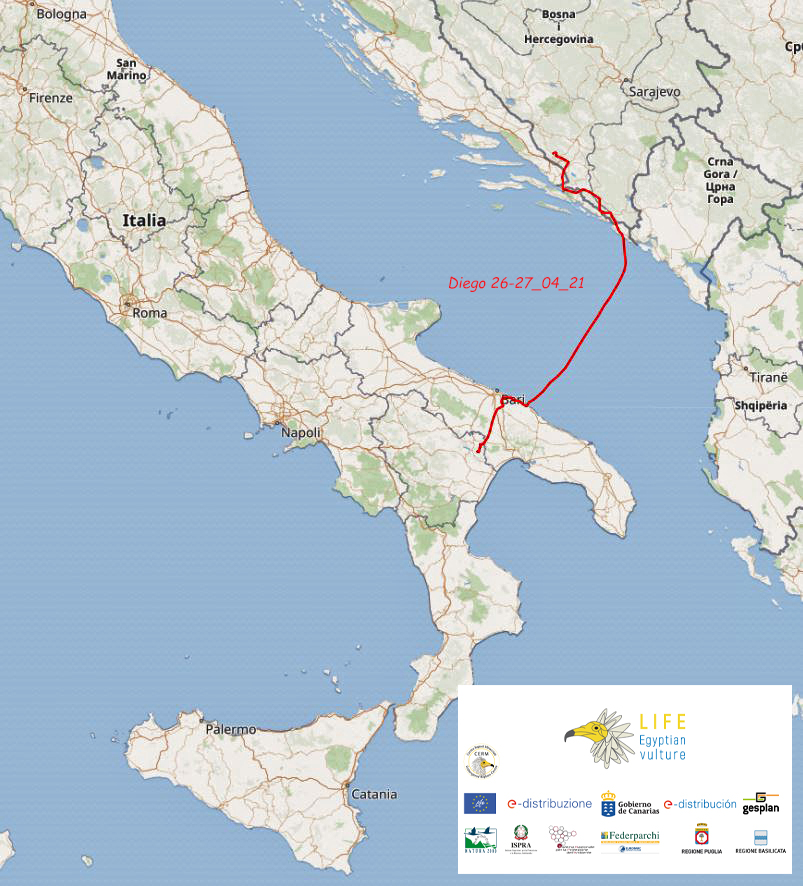 This is the first time such an event has occurred: none of the other 32 Egyptian vultures born at CERM and released in the wild had ever travelled east across the Adriatic Sea. Since his release Diego had always remained in Italy, in fact he had not migrated to Africa but he had spent the two previous winters in Sicily. In the spring and summer of 2020 he had stayed in an area between Basilicata and Apulia.

In the morning of 26 April 2021, Diego, who had returned from Sicily on 2 April, stopped at the activated feeding station near Matera. After the break, Diego flew eastwards to Monopoli on the  Apulian coast, once there he climbed to an altitude of 1800 metres and flew over the Adriatic Sea in a 190 km stretch of water. After three and a half hours of flight, at an average speed of 54 km/h, he reached the coast of the former Yugoslavia and headed north the following day.

It is very likely that the young Egyptian vulture followed the many birds of prey that, in that stretch, cross the Adriatic on their way to Eastern Europe, in particular pallid harriers, honey buzzards, cuckoo falcons, hobbyists and ospreys.

It is extraordinary and exciting to be able to constantly follow his unpredictable movements, which are typical of erratic youngsters. This is also possible thanks to the support of the VCF Vulture Conservation Foundation, which has made GPS devices available to the project and it is bearing the costs of data transmission.