(description taken from a text by the Government of the Canary Islands)
In terms of surface area, Fuerteventura is the second largest island in the Canarian archipelago, covering 1659.74 km2. It is also the longest island, with more than 100 km separating Punta Tiñosa, to the north, from Punta de Jandía, to the south. Less than 10 km from Fuerteventura lies Lobos island, measuring just 4.58 km2.

Nine SPAs have been designated in Fuerteventura, eight of which are mainly due to their interest in the conservation of the endemic subspecies of Egyptian vulture or “guirre” (Neophron percnopterus majorensis). The island of Fuerteventura is the main area of Canarian nesting; in total, these SPAs cover an area of 68,713.31 ha, which makes up approximately 42% of the island. Thirteen Special Areas of Conservation (SAC) have also been designated.
On 17th May 2009, Fuerteventura was declared a UNESCO Biosphere Reserve over a total area of 353,500 ha (165,664 ha of land and 187,836 ha of marine area). It should also be noted that Fuerteventura has the only Ramsar area in the Canary Islands (featured on the list since 2007): Saladar de Jandía or Playa del Matorral, covering an area of 91.53 ha.
In Fuerteventura, there are 13 areas of the Canary Network of Protected Natural Spaces, which cover 47,726.9 ha (30% of the island’s total surface area): Three natural parks, a rural park, six natural monuments, two protected landscapes and a site of scientific interest. 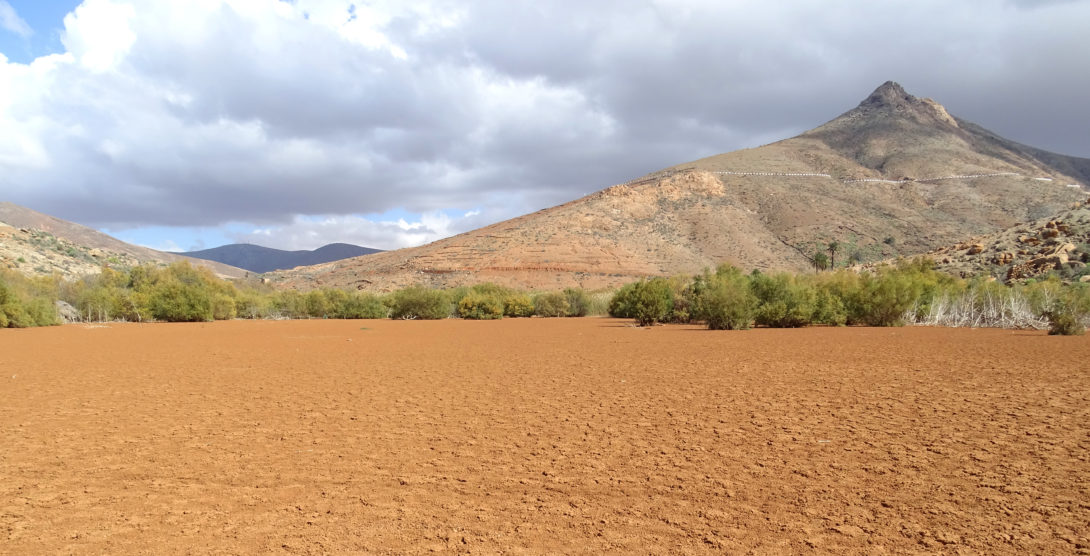 Fuerteventura is the oldest island in the Canary Islands, formed about 20 million years ago. It is a predominantly flat island, with 71% of its surface less than 200 metres high. It’s tallest peak is Pico de la Zarza, which is 807 m high. Along with Lanzarote, Fuerteventura forms a unique volcanic system separated by a strait where the sea is no more than 40 metres deep.
The island’s structure is ancient and shaped by atmospheric agents: Erosion has dug a drainage network composed of gorges separated by narrow dividers (a knife edge system known as an arête) which gives rise to typical U-shaped valleys. The island has two very different parts: Maxorata, almost 70 km long between the extreme north and the isthmus of La Pared, and the peninsula of Jandía. Three great geomorphological elements can be seen at Maxorata: The central plain (a large depression that occupies the central area of the island dotted with the volcanic peaks of Pliocene and Quaternary), the systems of valleys and arêtes (interfluves, with ridges which are more or less protruding between the valleys) and the massif of Betancuria – an area dominated by gently sloping hills and rounded peaks and alluvial terraces at the bottom of the gorge.
On the Jandia Peninsula are arête systems, the Quaternary plain of Punta de Jandía and the great arch of Cofete. The coastline is mostly low and sandy with the exception of the western part of the island, which is steep. Sedimentary formations, especially the accumulations of wind sands (jables) in Jandía and Corralejo, also emerge from the landscape. 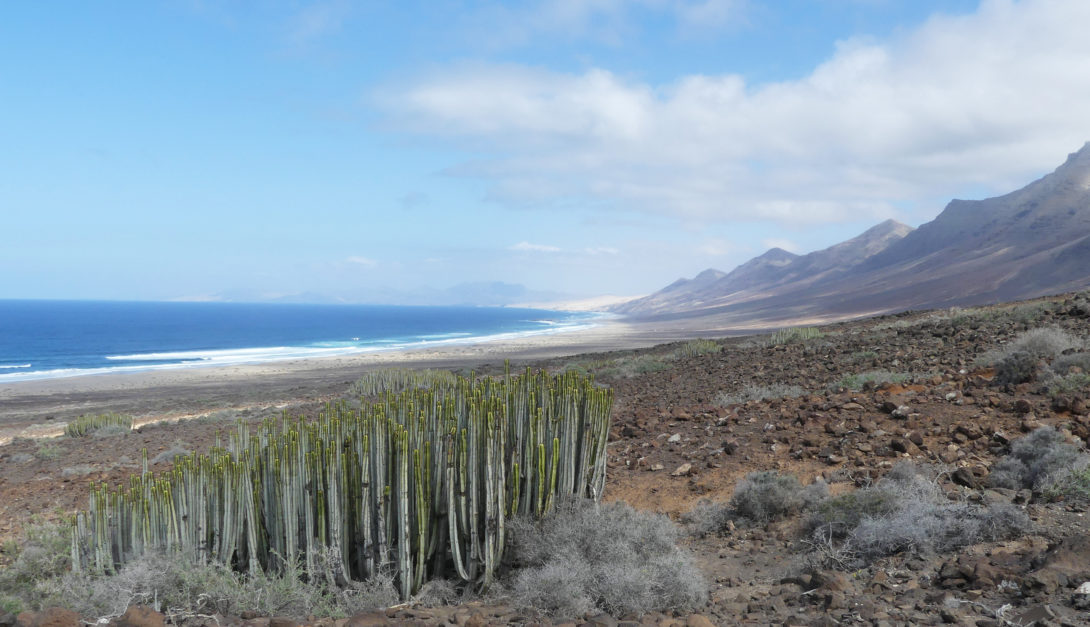 The climate of the island can be classified as a hot desert, with a tendency towards aridity. The poor climatic variety of Fuerteventura together with its low topographical diversity mean that the island has a remarkable ecological uniformity and a predominance of dry environments with scarce vegetation.
The island of Fuerteventura boasts 128 endemic species, including 103 arthropods, 12 molluscs, 11 plants, a bryophyte and a bird (Saxicola dacotiae).
The birds are the most represented group of invertebrates, with 45 nesting species. That which without a doubt stand out here are the species of steppe associated with the sandy and rocky xerian plains that occupy a large part of the island. These species, characterised by ochre-coloured plumage and ground-nesting, include the Lesser short-toed lark (Calandrella rufescens polatzeki), the Black-bellied sandgrouse (Pterocles orientalis), the Canarian houbara (Chlamydotis undulata fuertaventurae) and the Cream-coloured courser (Cursorius cursor), as well as species such as the Eurasian stone-curlew (Burhinus oedicnemus) and the Trumpeter finch (Bucanetes githagineus).
In addition, birds living in walls and on cliffs constitute a well-represented group on the island, which includes the Kestrel (Falco tinnunculus) and the Barbary falcon (Falco pelegrinoides).
The ornithological importance of the area is due to the high number of migratory or wintering birds which have been recorded there.
Fuerteventura is the main distribution area of the Egyptian vulture in the Canaries: 67 nesting areas were recorded in 2017, mainly concentrated in the central part of the island. 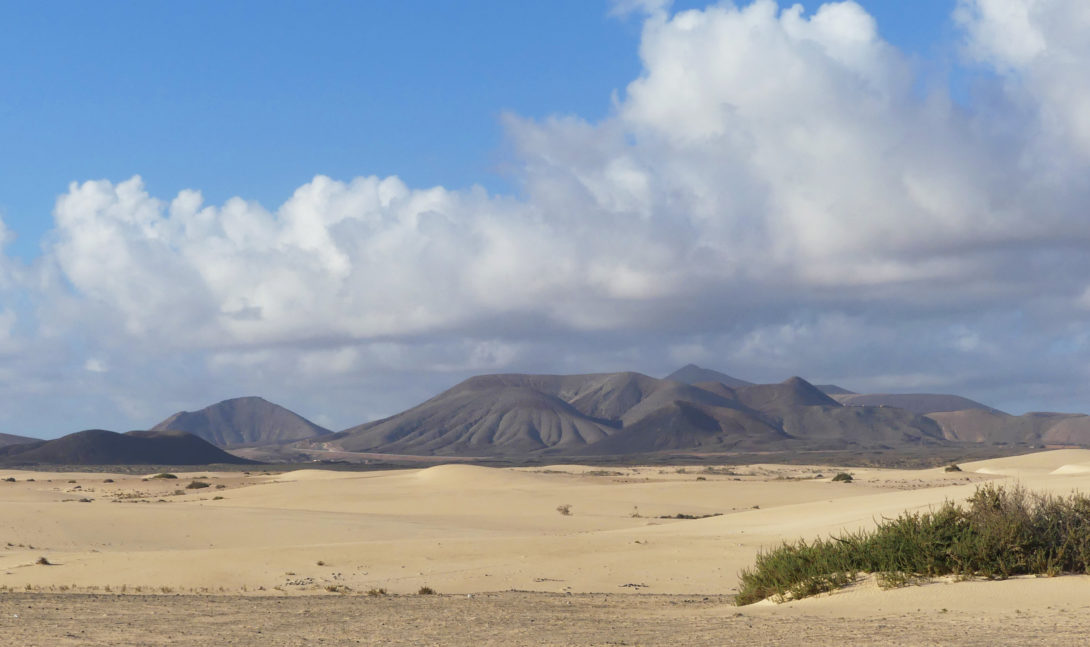